EICAS has a very important position in the cockpit meter design. Compared with the old-fashioned instrument, EICAS has the following advantages:

⒈ has full monitoring and a variety of display functions. EICAS can monitor the engine and the aircraft systems in the full process of flight, and continuously display data;

⒉ has real-time integrated display. EICAS can display the comprehensive information of the aircraft in real time, which makes it easy to monitor the aircraft;

⒊ has storage capabilities. EICAS can record the engine to continuously record certain automators and other systems of the engine and other systems, for the ground maintenance personnel to troubleshoot; grade alarm function. In the flight, the warning information is designed in different colors to express the urgency and failure of response. 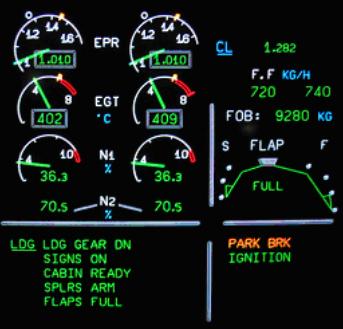 Eicas is a key function of modern glass cockpit. In modern instrumentation, software shows instead of most of the traditional instruments; the usual display will include flight attitude and navigation information, but generally there will be a display specifically display EICAS information.

EICAS "Unit Warning System" (CAS) section replaces the ANNUNUNUNUNUNUNCIATOR PANEL in the old-fashioned aircraft, the corresponding indicator light is automatically lit up when the aircraft fails. In EICAS, the system failure is usually displayed on one side of the EICAS display in the form of a text list.