As the old revolutionary base areas of eastern airports, navigable Xingning Airport after becoming the party and state leaders visited the first stop Meixian area. When the birthday anniversary of Marshal Ye Jianying, a number of central leaders of the children to take the plane landed Xingning Airport. 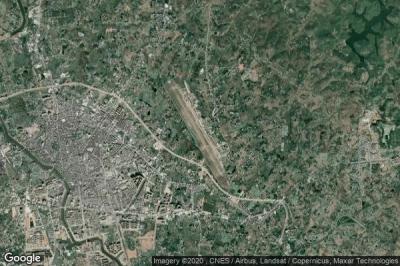 1979 Nian 2 17, a truck loaded with radio equipment, meteorological truck equipment and other airport facilities bumps along the way from Guangzhou to Xingning military airport, accompanied by a 17 staff Xingning open air services from all over the drawn, after 10 days of intense preparation, February 26, Civil aviation Xingning station successful sea trial. Ilyushin Il-14 aircraft using the airport 48 flight, ticket price is 24 yuan, equivalent to half the monthly salary of ordinary cadres at that time. Zhong Hua Sen said with deep feeling:. "Despite the former military airport in Xingning this basis, but opening in such a short time civil aviation, is not easy, obvious that vigorous and resolute determination and regional leadership style"

"That civil aviation facilities at very simple, just meet the minimum navigation conditions "Zhong Hua Sen told reporters described the prevailing situation: Terminal is a large cottage, this cottage is set office, waiting, stay in one of the" triple play "products , lounge was divided in half, half the passengers waiting, for half the day and work at night 17 staff all crowded in there "to spend the night." In the combination of military and civil aviation 8 years, Guangzhou Civil Aviation Administration of Civil Aviation of Xingning station has invested about 70 million yuan, the construction of the ticket office, staff quarters, dining hall, lounge and so simple, so Ning airport conditions improved.

At that time the total construction investment Meixian airport was 31.82 million yuan, but for when the economy was still quite backward Meixian area, this is not a small expenditure how to solve? Zhong Hua Sen recalled: "At that time approved construction funds only 17.41 million yuan, and Meizhou airport construction budget required more than 2900 ten thousand yuan." Zhong Hua Sen said that in order to fill the vacancies of which more than 10 million, the region on the one hand ask the provincial government to support 400 million, one hand raised funds through various channels vacancy. Finally, it includes a variety of facilities and equipment shipped over from Xingning, Meixian airport with a total investment amounting to 31.82 million yuan. The construction of the airport has been the strong support of Meizhou municipal government and the Triangle town government and the people, the new airport 1290 mu of land the villagers involved a large-scale wood processing enterprises and Triangle Town 5 village, only 230 million will be completed All land. "Such a large-scale land acquisition, according to the current situation, only the land acquisition costs will need at least a 50 million yuan." Zhong Hua Sen says.

After the completion of Meizhou Airport, passengers unprecedented peak, bell Mori anticipated. The new airport using 130 Boeing 737 aircraft, the fare is 50 yuan. "When officially opened to traffic September 1, 1987, four times a week 'Guangzhou - Meizhou - Guangzhou' flight, even classes in full in November the same year began to class every day, or overcrowding in 1989, the opening of 'Meizhou - Hong Kong - Meizhou 'after the flight, the passenger still. even holidays, overtime aircraft, also per trip full. high enthusiasm of passengers lead to tickets very nervous, even a ticket is hard situation arise. "he recalls citizens rushed to travel by plane pomp, Zhong Sen Huayi face excitement. "Trustee was able to buy a ticket, that is a big favor."

Huajie Shao Zhong Sen said, Meizhou Airport from sailing to 1995, passenger traffic almost 25% -30% range per year the increment. In 1995 to 1993, it is a continuous rise in passenger traffic of the airport Meizhou brilliant period, including Guangzhou, Zhuhai, Shenzhen, Hong Kong and Xiamen, including five shipping routes at the same time, within 22 sorties taking off and landing aircraft up to one week, annual passenger throughput up to 17.8 million people (times).

In order to fill the gaps in aviation history Meizhou no international regional routes, Meizhou City, actively carry out the preparatory work for the opening of new routes, built in 100 days, the international terminal.

1987 years, the Taiwan Open veterans returned home, sometimes set off Taiwan tide returned home. For the convenience of Taiwan compatriots to return home, the formation of international and regional routes seem imperative. In 1989, when he was mayor of Meizhou Huang Huahua commitment to very large, established the Port Office, Office of Ren Wuzhao ring delegate based in Beijing, to get approval to establish the Port Office, Port Office established earlier became the province's prefecture-level city. On the other hand invested more than 130 million in just 100 days, built a international terminal. In 1994, in response to the peak passenger flow at the time, Meizhou City once again to spend nine million yuan, it has built an area of ​​2552 square meters international terminal, and further improve the passenger travel environment.

2 km from the airport Xingning city center, east of Meizhou City (Plum City) 53 km, you can take a bus or taxi.