According to the circuit diagram, first divide a number of functional component diagrams, and then use the plane layout method to transform into the plane circuit layout on the substrate, and then use the photo-engraving method to make the wire Thick film web template for screen printing. The most commonly used substrates for thick-film hybrid integrated circuits are alumina ceramics with a content of 96% and 85%; when particularly good thermal conductivity is required, beryllium oxide ceramics are used. The minimum thickness of the substrate is 0.25 mm, and the most economical size is 35×35-50×50 mm. The main processes for making thick film networks on a substrate are printing, sintering and resistance trimming. The commonly used printing method is screen printing.

During the sintering process, the organic binder is completely decomposed and volatilized, and the solid powder is melted, decomposed and combined to form a dense and strong thick film. The quality and performance of the thick film are closely related to the sintering process and the ambient atmosphere. The temperature rise rate should be slow to ensure that the organic matter is completely eliminated before the glass flows; the sintering time and peak temperature depend on the slurry and film structure used. In order to prevent the thick film from cracking, the cooling rate should also be controlled. The commonly used sintering furnace is a tunnel kiln.

In order to achieve the best performance of the thick film network, the resistance needs to be adjusted after the resistor is fired. Commonly used methods of resistance adjustment include sandblasting, laser and voltage pulse adjustment. 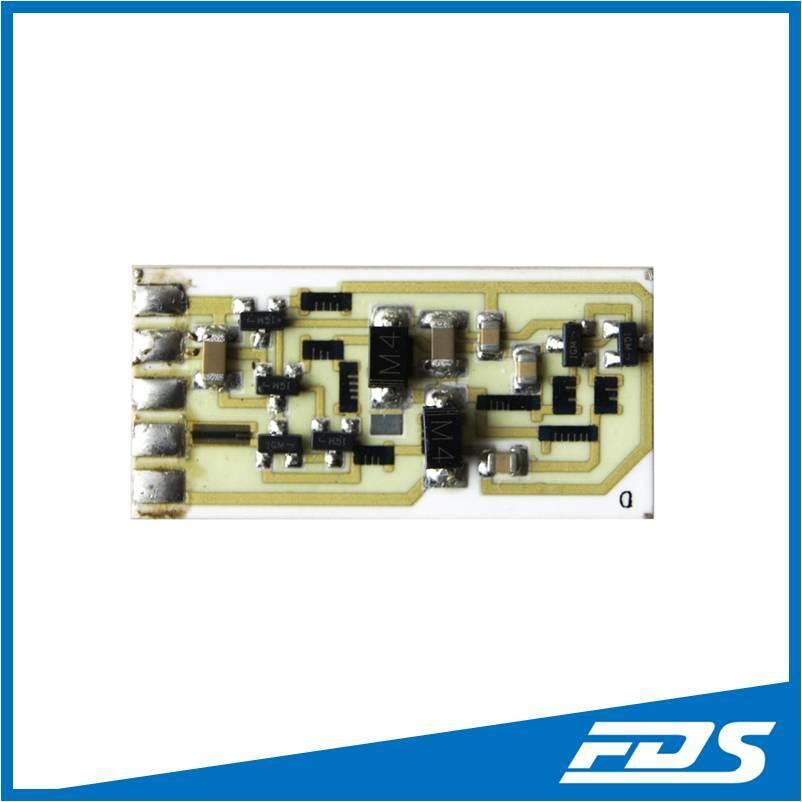 Thick film material is a type of paint or slurry, which is formed by one or several solid particles (0.2-10 microns) uniformly suspended in a carrier. In order to facilitate printing and forming, the paste must have suitable viscosity and thixotropy (the property that the viscosity changes with external force). Solid particles are an integral part of the thick film, which determines the properties and uses of the film. The carrier decomposes and escapes during the sintering process. The carrier contains at least three components, resin or polymer binder, solvent and surfactant. The binder provides the basic rheological properties of the slurry; the solvent dilutes the resin and then volatilizes away to dry the printed pattern; the activator makes the solid particles infiltrated by the carrier and properly dispersed in the carrier.

According to the nature and purpose of thick film, there are five types of pastes used: conductor, resistor, dielectric, insulation and encapsulation paste.

Conductor paste is used to manufacture thick film conductors, which form interconnects, multilayer wiring, microstrip lines, soldering areas, thick film resistor terminals, thick film capacitor plates and Low resistance resistance. The welding area is used for welding or pasting discrete components, devices and external leads, and sometimes also used for welding on the metal cover, in order to realize the encapsulation of the whole substrate. Thick film conductors have different uses, and there is no paste that can meet the requirements of all these uses, so a variety of conductive pastes are used. The common requirements for conductive paste are large electrical conductivity, strong adhesion, anti-aging, low cost, and easy soldering. Commonly used metal components in conductive pastes are gold or gold-platinum, palladium-gold, palladium-silver, platinum-silver and palladium-copper-silver.

In thick film conductive pastes, in addition to metal powders or metal organic compounds with appropriate particle size, there are glass powders or metal oxides with appropriate particle size and shape, and organic carriers for suspended solid particles. Glass can firmly bond metal powder on the substrate to form a thick film conductor. Commonly used alkali-free glass, such as borosilicate lead glass.

The medium slurry is made of low-melting glass and ceramic powder particles uniformly suspended in an organic carrier. Commonly used ceramics are barium, strontium, and calcium titanate ceramics. By changing the relative content of glass and ceramic or the composition of ceramics, thick dielectric films with various properties can be obtained to meet the needs of manufacturing various thick film capacitors.

Thick film insulation is used as an insulating layer for multilayer wiring and crossover wires. The requirements for it are high insulation resistance, low dielectric constant, and linear expansion coefficient that can match with other film layers. The commonly used solid powders in insulating slurry are alkali-free glass and ceramic powders.