(e.w.dijikstra) in 1965, is an important milestone for software development. Its main point of view is the use of self-top, gradually refined programming methods; use three basic control structural constructors, any program can be constructed from the order, selection, and cycles. It is centered on modular design to divide the software system to be developed into several independent modules, which makes the operation of each module are simple and clear, and make a good foundation for designing some larger software.

in demand analysis, summary In the design, it is used as a method of self-bottom, layer-by-layer refinement.

any program can be constructed from the order, selection, and repeat three basic control structural configurations.

(1) Decompose the process in order, determine the execution order of each part.

(2) Decompose the process in the selection mode to determine the execution conditions of some part.

(3) Decompose process decomposition by looping, determine the conditions for the start and end of a portion.

(4) The above decomposition method is repeatedly used in the processing process, and it will eventually determine all details. 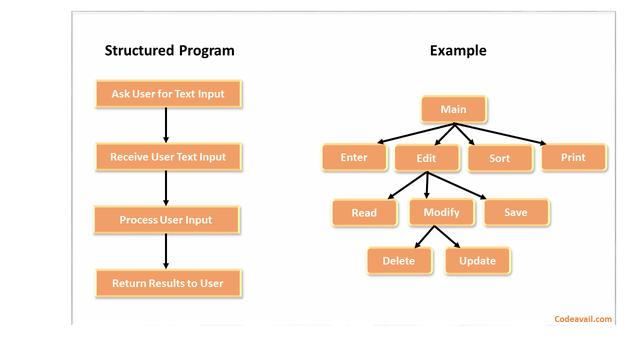 Since the top down

When designing the program, consider the overall, then consider the details; first consider the global goals, consider local targets. Don't earn too much detail at the beginning, start designing from the top-level overall goal, gradually making problems.

for complex problems, some sub-target should be designed as a transition, gradually refined.

a complex problem, is definitely consisting of several slightly simple questions. Modularity is to decompose the total target to be resolved into a sub-target, further decompose into a specific small object, refer to each small target as a module.

(1) GOTO statement is really harmful, should be avoided;

(3) The focus of the debate should not be placed on whether to cancel the goto statement And what kind of program structure should be placed. The most critical is that the GOTO statement should be restricted in the structured method of improving program clarity.

Sequential Structure Representation The operation in the program is performed in the order in which they appear.

Select Structure Representation The processing step of the program has a branch, which requires one of the branches in which a particular condition is selected. Select structure with single selection, double selection, and more.

The loop structure representation program repeatedly executes one or some operations until a certain condition is fake (or true), it can terminate the loop. The most important thing in the loop structure is: What is the loop? Which operations need to be executed? There are two basic forms of the circulating structure: model cycles and until the cycle.

Any basic structure in the structured program has a unique portal and unique outlet, and the program does not have a dead cycle. There is a good correspondence between the static form of the program and the dynamic execution process.

Since the module is independent of each other, when a module is designed, it will not be implicated by other modules, so that the original complicated problem can be simply simple. Module design. The independence of the module is also a lot of convenience to the establishment of a new system, because we can make full use of the existing modules for wood-type extensions.

According to the viewpoint of structured programming, any algorithm function can be implemented by a combination of three basic program structures consisting of program modules: sequential structure, selection structure, and loop structure.

The basic idea of ​​structured programming is the control structure of the "self-top, step-by-step refine" programming method and "single-inverting single export". Since the top, the programming method begins with the problem itself. After gradual refinement, the step of solving the problem is broken down into structured block diagram consisting of basic program structural modules; "single entrance export" thinking A complex program, if it is only combined, select, and cycling three basic program structures by combining, nested, then this new constructor must be a single-entrance population outlet. According to this, it is easy to write a good structure, easy to debug.

1 overall thinking, the target is clear.

2 The design work is very strong, which is conducive to the overall management and control of system development.

3 can diagnose problems and structural defects in the outbound system during system analysis.

1 User requirements are difficult to accurately define in the system analysis phase, resulting in a number of issues when the system is delivered.

2 Use the system to develop the results of each stage to control, and cannot adapt to the requirements of the changes.

3 The development cycle of the system is long.