Concentrated winding is used in salient pole stators, usually wound into rectangular coils, which are wrapped with warp yarn and shaped, and then immersed After the lacquer is dried, it is embedded in the core of the convex magnetic pole. Generally, the excitation coils of commutator motors (including DC motors and general motors) and the main pole windings of single-phase shaded-pole salient pole motors use concentrated windings.

Concentrated windings usually have one coil per pole, but some also use the form of conjoined pole (hidden pole). For example, a frame-type shaded pole motor uses one coil to form two poles.

The stator of the distributed winding motor has no salient pole palms. Each magnetic pole consists of one or several coils embedded and wired according to a certain rule to form a coil group, which is energized After the formation of magnetic poles of different polarity, it is also called hidden pole type. According to the different arrangements of embedded wiring, distributed windings can be divided into two types: concentric and stacked. 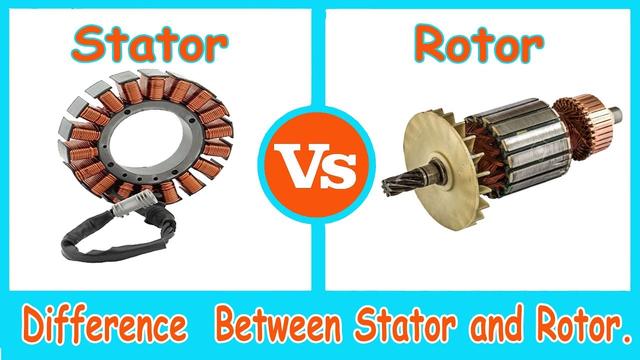 The rotor winding of AC asynchronous motor is divided into squirrel cage type and winding type. The squirrel-cage structure is relatively simple, generally formed by pouring alloy aluminum into the rotor core groove and shorting the end rings at both ends; copper strips are also used to embed and weld the copper end rings. In order to improve the starting performance, the squirrel cage type can be made into special types such as deep groove type and double squirrel cage. The winding type rotor winding is the same as the stator winding. In addition to the above-mentioned windings, wave windings can also be used. The wave winding is a single-turn or several-turn rod-shaped unit coil. After installation, two components are welded at the end to form a coil and form the entire winding. The wiring principle is different from the above-mentioned winding, but the appearance is the same as that of the double-stacked winding. Similar. Wave windings are often used in the rotor windings of large AC motors and the armature windings of DC motors.

Different wiring forms of the stator windings can form different polarities. According to their polarity relationship, the motor can be divided into two types: the obvious pole type and the common pole type.

A motor stator with four salient poles, each coil of which forms a magnetic pole; and the polarities formed by two adjacent coils are different; on the four salient poles Four magnetic poles are formed. Therefore, in the salient pole winding, each group of coils forms a magnetic pole, that is, the number of coil groups of the winding is equal to the number of magnetic poles. In addition, in order for adjacent magnetic poles to exist in pairs with N and s polarities, the current directions in the adjacent two sets of coils must be reversed. Therefore, the connection mode of two adjacent coil groups must be reversed in series, which is called "head joint" and "tail joint" in electrical engineering terminology.

In fact, except for DC motors and single-phase salient-pole shaded pole motors, the stator generally has no protruding pole palms. In order to illustrate the problem more vividly, a schematic drawing method is used.

The image diagram of a single-pole four-pole winding stator. The polarities of the adjacent two sets of coils are the same, they are all s poles. Due to the principle of repulsion of the same polarity, the magnetic field formed by the coils returns through the adjacent salient poles to form a closed magnetic circuit; so that the salient poles without coils N magnetic poles of opposite polarity are produced. Therefore, in the single-pole winding, each coil group will form a pair of magnetic poles, and the number of coil groups in each phase winding is half of the number of magnetic poles.

In the single-pole winding, because the magnetic poles generated by each group of coils are the same, the current direction in all coils is the same, that is, two adjacent coil groups are connected in series. This wiring method is commonly called "end to end", that is, "tail joint" connection.

The motor winding is a combination of one phase or the entire electromagnetic circuit formed by a coil group; and the coil group is formed by one or more coils connected in series. Therefore, the coil is the basic element of the motor winding, and it is also made of insulated wires (round or rectangular cross-section wires) wound in a certain shape. The coil can be one turn or hundreds or thousands of turns. The number of turns depends mainly on the power supply voltage and the parameters of the electromagnetic part of the motor, and is determined by calculation.

There are many shapes of motor coils, but its basic structure is composed of three parts, that is, the linear part embedded in the core slot is called the effective side, and a coil has two effective sides, which is to generate electromagnetic energy. The effective part of the conversion; the part connecting the two effective sides is outside the slots at both ends of the core after the coil is embedded, called the coil end. It is an indispensable part of the coil, but it cannot be used for energy conversion; the lead is coil winding The rear head and tail ends are also the connection points for the coil current.

The winding and embedding of the centralized winding is relatively simple, but the efficiency is low, and the running performance is also poor. Most of the current AC motor stators use distributed windings. According to different models, models and the process conditions of coil embedding, the motors are designed with different winding types and specifications, so the technical parameters of the windings are also different.