Semiconductor light-emitting diodes are simple in structure, small in size, low in working current, easy to use, and low in cost, so they are extremely popular in optoelectronic systems.

Under forward bias, a semiconductor PN junction or similar structure can emit visible light or near-infrared light. This device that directly converts electrical energy into light energy is called a light-emitting diode, or LED for short.

Luminescence is the process by which energy stored in a certain way inside an object is converted into light radiation. The light radiation of a light-emitting object is generated when the excited electrons in the material transition to the ground state. Semiconductors (mainly compound semiconductors composed of Group III and Group V elements in the periodic table) light-emitting diodes are electroluminescent devices excited by current.

The phenomenon of electroluminescence was discovered in 1923 and did not attract people's attention at that time. With the development of modern technology, new requirements are put forward for light-emitting devices, and it is hoped that the light-emitting tube is simple, reliable, long-lived, low-cost, and miniaturized. Therefore, the research on electroluminescence has been very active since the 1960s. 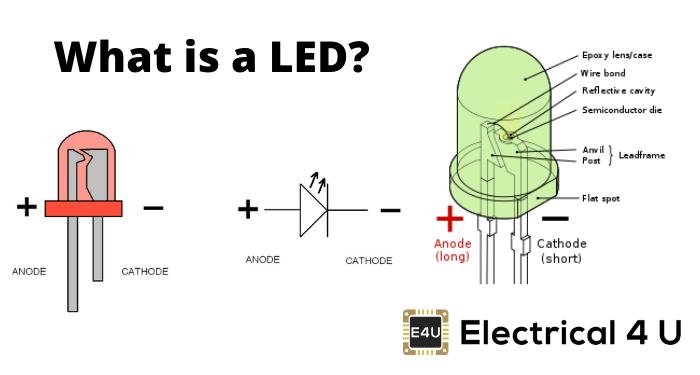 The structure of the LED varies depending on the application and material doping. LEDs used for visible light indication and display require structural optimization to obtain high efficiency; LEDs used for optical communications require high radiance to couple the maximum power into the fiber, and greater modulation capabilities are also desired. The basic structure of LED used as indicator light and display is shown in Figure 2.

The emission wavelength of the LED for optical communication must be in the window area where the optical fiber exhibits low loss. The 0.8-0.9 micron GaAlAs-GaAs light-emitting tube and the 1.3-1.6 micron InGaAsP-InP light-emitting tube, the wavelength falls on the first and second transparent windows of the quartz fiber, respectively. In order to couple with the fiber, light can be extracted from one side or one side of the LED.

①Improve the internal quantum efficiency and reduce crystal defects and harmful impurities as much as possible; ②Improve the external quantum efficiency, and the structure should be convenient for light collection, extraction and emission; ③ The information-carrying output current can be used to directly modulate the optical output at a high rate; ④The structure should be conducive to heat dissipation and reduce the drop in optical power caused by the rise in junction temperature; ⑤It must have high radiance, so direct band gap semiconductors must be used And a structure that can be driven at high current density.

①Output light power and current and temperature The relationship is shown in Figure 3. For surface light emitting devices, when the driving power is small, the output power increases linearly with the current, and when the current is large, it becomes sub-linear, and the quantum efficiency also decreases, which is caused by the temperature rise of heat. Due to the considerable gain of the super luminescent diode, the device has a strong super-linear behavior, and the temperature sensitivity increases with the increase of the gain; ②spectral characteristics, the surface-emitting LED spectrum belongs to the spontaneous emission spectrum.

GaAlAs (gallium aluminum arsenic) device with an emission wavelength of 0.85μm, the spectral width is about 40nm. The 1.3μm InGaAsP (Indium Gallium Arsenide Phosphorus) device is 110nm. The end-emission LED, due to self-absorption along the length of the active area, has a narrower spectrum width than the surface-emission LED. For super luminescent diodes, the appearance of optical gain makes the spectrum further narrower; ③The output power and modulation bandwidth affect the output power of the LED. The factors that adjust the bandwidth include interface non-radiative recombination, self-absorption and carrier leakage. These factors are related to device parameters, such as doping concentration, minority carrier diffusion length, absorption coefficient, active layer thickness, band gap energy difference between active layer and confinement layer in double heterojunction, and injection current density. These parameters are related again. The modulation bandwidth has a reciprocal relationship with the output power, and the product of power and bandwidth is also different for a specific material and process level.

LEDs used as indicator lights have two structures: radial lead structure and axial lead structure. The former is small in size and low in price, and is suitable for installation on a printed circuit board; the latter can be installed on the instrument panel or directly on the printed circuit board. The smallest LED indicator designed specifically for printed circuit boards, compatible with transistors and integrated circuits, to indicate circuit status and faults. LED can be used as a TV channel tuning indicator, and can also be used in high-fidelity radios and tape recorders, as well as in the automotive, aircraft, and electromechanical industries. Most indicator lights are single-tube cores, and new developments include two-color and multi-color lights.

LED is used as a pocket calculator. The digital display of digital watches and electronic instruments is generally a seven-segment display. But for desktop calculators, the more flexible display method (to produce full text-numbers) is a 35-dot matrix, where the LEDs are arranged in a 7×5 array. The 35-dot matrix is ​​expensive and the drive circuit is complicated, and its application is not as wide as the seven-segment display device. Optical coupling device  The combination of GaAs (or GaAsP) LED and Si-PN junction detector can be made into many new devices for optical-electricity and electric-optical transmission, usually called optical coupling devices. The well-known is an opto-coupled isolator, which is high-speed, reliable, and provides electrical isolation as high as 2.5 kV. GaAsLED and Si transistors are combined to form a punch card or tape optoelectronic reading head, which is more reliable, stable, shock-resistant and less power consumption than the radial distribution of tungsten filament lamps. The automobile ignition device using optical coupling device is fuel-efficient, easy to start, and works smoothly. GaAlAs negative resistance light-emitting diodes can be used as light-emitting switches, controllable light-emitting rectifiers and light wavelength conversion.