With the development of electronic devices, the processing power of computers has been significantly improved. However, the speed increase achieved only by the progress of devices is far from meeting the needs of modern science, technology, engineering and many other fields for high-speed computing capabilities. This requires people to improve the computer structure and adopt various parallel processing technologies in order to greatly increase the processing speed and problem-solving ability. 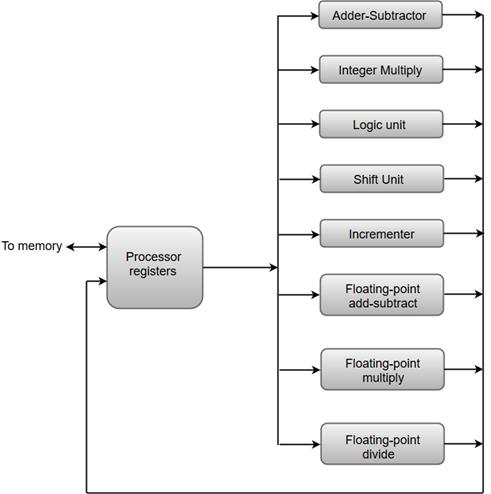 ② Cross switch structure: The cross switch is composed of a crossbar switch array, which connects the horizontal processor and the vertical memory module (Figure 4).

Data stream processor is a highly parallel processor that is valued by people. Although it retains the practice of storing programs, the main principle is different from the Neumann computer structure. It does not execute the program in the order of instructions indicated by the program counter. As long as all required operands are available, the instructions can be executed, that is, the execution of the program is not driven by control flow, but by data flow.

Data stream processor is a language-based processor. It uses data flow program diagram as the interface between user language and computer structure. The data flow program diagram is represented by an active box. Each active frame has multiple fields, which store operation code, operand and target address respectively. The data flow program is stored in the active memory in the form of a collection of active frames. When an instruction can be executed, the corresponding active frame address is sent to the instruction queue. The reading component fetches the active frame from the memory according to the address to form an operation packet, which is sent to the operation component for processing, and a result packet is generated. The modification component sends the result data to the specified active frame as the operand according to the target address of the result packet, and sends the address of the instruction with the operand to the instruction queue. The instructions in the instruction queuing device have the execution conditions, so only need to increase the number of components or enhance the degree of component pipeline, it can be executed in parallel at high speed. In addition, multiple instruction processing units can also be connected into a data stream multi-processor system to further improve processing capabilities.

In vector computers, the main problem of increasing the degree of parallelism is to use vectors to represent operands that can be processed in parallel. Many commonly used numerical calculation methods, such as sequence summation, matrix multiplication, Gaussian elimination, fast Fourier transform, etc., have been successfully implemented in parallel on vector computers. The more popular parallel language is basically an extension of the FORTRAN language.

In a multiprocessor system, the key to improving program parallelism is to decompose tasks into enough processes that can be operated at the same time. In the programming language, it is necessary to expand the statement that can clearly express the concurrency of the process, so that the corresponding control mechanism can provide control and management means when the program is running, including the derivation, communication and scheduling of parallel tasks. ADA language provides the necessary sentences for describing the structure of parallel programs of multiprocessors. Several data flow languages ​​such as Id language and VAL language that have emerged to adapt to data flow computers have been tried out. Its important feature is that it treats arrays as values ​​rather than targets. Programs written in data flow language can naturally express the maximum parallelism of operations.

For the classification of parallel processing systems, the most widely used is to divide computer systems into four categories based on the multiples of the data flow and instruction flow in the computer system ：

Multiple Instruction Multiple Data, MIMD computer system, in MIMD computer system, multiple processing The processor completes different instruction sequences in parallel and processes different data. MIMD computers are actually multi-processor parallel systems. Under the organization of MIMD, each processor is universal, and each processor can process all data and complete instructions for corresponding data operations. The MIMD system can also be further divided according to the communication mode of each processor. If each processor shares a memory, each processor accesses the programs and data in the shared memory and communicates with each other via the secondary memory. The most common form of this structured system is the SMP system. SMP realizes that multiple processors share a single memory or memory group through a shared bus or other means of interconnection. In the SMP storage system, the memory interface performance is basically the same for each processing unit, that is, the acquisition events for the shared storage are basically the same for each processing unit. A group of independent processors or SMPs can be interconnected by communication links or other fixed paths between computers, or even network equipment, to form a cluster system. The NUMA system implements different speeds of read/write to its internal memory, so that the access time is related to the location accessed by the processing unit.

With the development of computer technology and the decline of hardware costs, designers have increasingly sought ways to achieve parallelism. Among them, many The processor parallel system can greatly improve the performance of the computer system. In a parallel processing system, the processing units can be executed in parallel to balance the input workload. At present, the most commonly used parallel multi-processor organization methods include symmetric multi-processor (SMP), cluster system (Cluster) and non-uniform memory (NUMA). SMP uses multiple identical or similar processors to form a multi-processor computing system in the form of a bus or switch array interconnection, which is a multi-processor computer in the usual sense. In the SMP system, the most important problem is storage consistency. Each processor has independent storage, namely high-speed cache memory. When a row of data appears in the Cache of different processors, if the content of a Cache is modified , Then the contents of other Cache and main memory should also be updated. This problem was solved in time by the Cache consistency protocol. The cluster system is formed by a group of complete computers interconnected, as a unified computing resource for data processing together, the outside of the entire cluster can be regarded as a cluster for processing. NUMA system realizes the parallel work of multi-processors by means of shared memory. The main feature of NUMA is that the memory word access time of a certain processor in the system varies with the memory word location.