Magnetic Concept Car is a high-tech concept car driven by a linear electric motor, which can be used on conventional roads or rapid transit systems. If realized, it would revolutionize the transportation system.

German designer Christian Verger borrowed the toy car of the Track Racer to design a concept car that uses magnetic force. Instead of putting the electric motor under the hood, the concept car sits under roads along the road.

The working principle of

"It means you can use roads where traditional cars run, but at the same time, you can also use rapid transit systems," said designer Verger. Dual mode design will increase the flexibility of the electric vehicle. When used in urban areas, the concept car can adopt an upward and vertical posture to save space and improve visibility. Once on the highway -- what Verger calls "high speed mode" -- the concept car can be unfurled to maximize aerodynamic efficiency and passenger comfort. 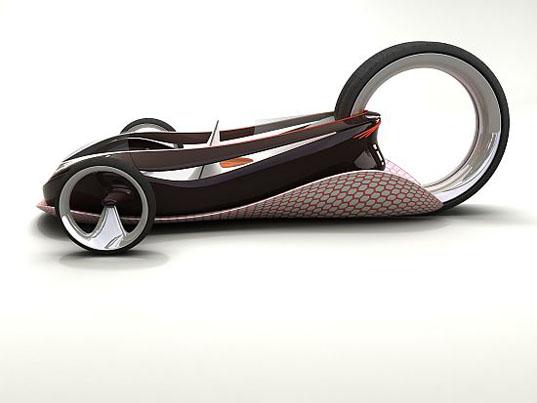 It is a kind of electric power transmission device which converts electric energy directly into linear motion mechanical energy by electromagnetic action. It can eliminate a large number of intermediate transmission mechanism, accelerate the system response speed, improve the accuracy of the system, so get a wide range of applications. In practical applications, in order to ensure that the coupling between the primary and secondary remains unchanged throughout the travel, the primary and secondary are generally manufactured at different lengths. A linear motor is similar to a rotating motor in that a magnetic field will also be generated in the air gap after the three-phase current is passed through. If the end effect is not taken into account, the magnetic field will show a sinusoidal distribution in the straight direction, but this magnetic field is translation rather than rotation, so it is called a traveling wave magnetic field. The electromagnetic thrust is generated by the interaction between the travelling wave magnetic field and the secondary field, which is the basic principle of the operation of a linear motor. Due to the above correspondence between the linear motor and the rotating motor, each rotating motor has a corresponding linear motor, but the structure form of the linear motor is more flexible than that of the rotating motor. The linear motor would also charge the electric car's battery and prepare it for urban travel.

"We just need to upgrade the highways that are used for long-distance travel," said designer Verger. Even with the upgrades, these roads can still be used by conventional cars."

If a "rapid transit system" does come into operation one day, a vast network of linear electric motors could be laid beneath Germany's autobahn. Instead of rotating the rotor, a linear motor generates electricity in the direction of the stator, the stationary part of the motor. During operation, the active magnetic field of the linear motor will drive the opposite magnetic field of the conductor, thus making it move forward.

That means you can take advantage of roads where traditional cars run, and at the same time, you can use rapid transit systems

Linear motors have been around since the 1840s, and a practical model was shown in Germany in 1935. Linear motors have been widely used in maglev trains and some urban transport systems. New York's JFK Airtrain and Vancouver's Skytrain are two well-known public transit systems that use linear electric motors, while the same technology is used for maglev trains in Shanghai and Japan. So the use of the magnetic concept car is not far off.