Method 1: No response without connection , It allows sending frames:

To multiple destination addresses in the same network (multipoint transmission)

To all addresses in the network (broadcast transmission) 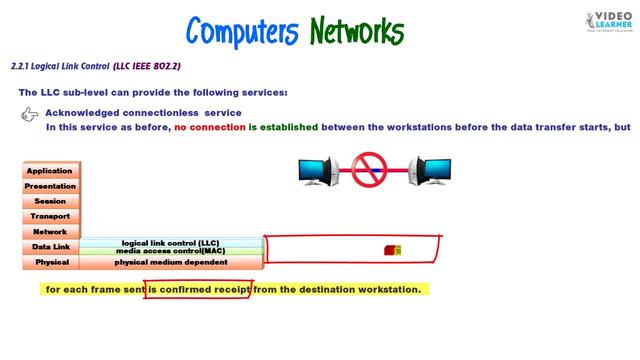 Multipoint and broadcast transmission can reduce network traffic when the same information needs to be sent to the entire network. Single-point transmission cannot guarantee that the order in which frames are received by the receiving end is the same as the order in which they were sent. The sending end cannot even determine whether the receiving end has received the frame.

Method 2: Connection-oriented operation method. By numbering each frame, the receiving end can ensure that they are received in the order in which they were sent, and no frame is lost. Using the sliding window flow control protocol allows the fast sending end to flow to the slow receiving end.

Method 3: No connection with reply. It is limited to point-to-point communication.

The header of LLC contains:

For easy distinction, there are three types of LLC PDU control fields, called U, I, and S frames.

S (Supervisory) frame, a 16-bit control field, used for management and supervision in the LLC layer.

Among these three formats, only U-frames are widely used. The last two digits of the first byte are used to distinguish these three PDU frame formats.