Refrigerate carbon black, resin, clay and other mixtures and heat treatment after heat treatment. The resistance is indicated by a color ring on the resistor. This resistor cost is wide range, but its resistance error and noise voltage are relatively large, poor stability, and less use.

Carbon film resistor is applied to an insulating base porcelain rod or ceramic tube with an organic adhesive to a suspension The heating is polymerized. The gaseous hydrocarbon is decomposed in high temperatures and vacuum, carbon deposited on the ceramic rod or ceramic tube to form a layer of crystalline carbon film. Alter the thickness of the carbon film or the method of using a split groove, alter the length of the carbon film, can be obtained. Its precision and stability are general, but its high frequency characteristics are better, affected by voltage and frequency and smaller noise electric motors, stable pulse load, wide range of resistance. Due to the low production cost, the price is cheap, so it is still available in consumer electronics. 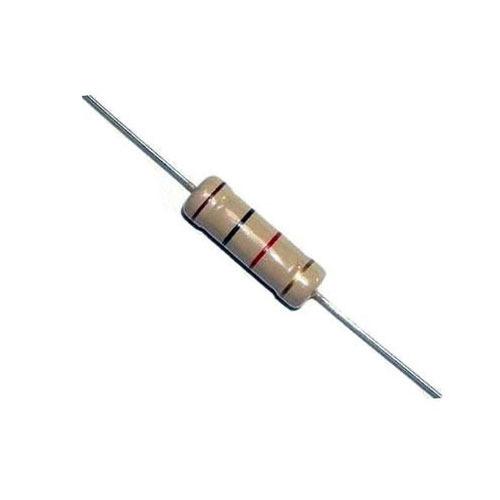 The metal film resistor is a special metal or alloy as a resistive material, a resistive film is formed on a ceramic or glass substrate with a vacuum evaporation or sputtering process. Layer resistor. The vacuum evaporation is to heat the alloy in vacuo to evaporate, form a layer of conductive metal film on the surface of the ceramic or glass rod, and can modify the component of the alloy material, change the thickness of the film or the intensive groove control to adjust the resistance, and the process is flexible. Therefore, a resistor having a good performance and a wide range of resistance ranges.

Metal oxide film resistor is a water-solved metal salt solution (such as tetrachloride and chloride) in a hot glass or The surface decomposition of ceramics is formed. As manufacturing conditions, the performance of resistors is also very different. The main feature of this resistor is high temperature resistance, and chemical stability is good. The resistance of this resistor is low, and the resistance value of the small power resistor does not exceed 100 kΩ, so the application range is limited, but it can be used as a low-resistive portion of the supplemental metal film resistor. The metal oxide film resistor body is mostly gray, small, is green or light pink, which is a tetra-colored ring resistance. Allow error rating ± 5%, ± 2%.

Based on the ceramic skeleton with Kang copper or nickel-chromium alloy resistance wire. This resistor is fixed and variable. It is characterized by working stability, good heat resistance, small error range, can withstand a large instantaneous peak power. The rated power is generally 1W or more, which can withstand high temperature, still working properly at ambient temperature at 170 ° C. But it is large, the resistance is lower, mostly below 100kΩ. Due to structural reasons, its distributed capacitance and inductance coefficient are relatively large, and cannot be applied to high frequency circuits. Such resistors are typically used for buck or load in high power circuits.

Put the resistance wire of copper, manganese copper, nickel-chromium, etc., on the absence of alkaline heat-resistant ceramic skeleton, plus heat resistance , Moisturizing, corrosion resistance, fixing the wire wind resistor, deprived the square ceramic material, filled with a special non-equivalent heat-resistant cement, and made a cement resistor. The coil resistor value of the wire structure is generally not large, and the high resistance value is made of metal oxide film substitute replacement.

The resistance value of the selected resistor should be close to a nominal value of the calculated value in the application circuit, and the standard series of resistors should be preferred. The general circuit used resistor allows the error to be ± 5% to ± 10%. Precision instruments and resistors used in special circuits should use precision resistors, resistors within 1%, such as 0.01%, 0.1%, 0.5% of these amounts of electrical resistance, should be used in Jet. The rated power of the selected resistor must meet the requirements of the resistor power capacity in the application circuit, and generally should not increase or reduce the power of the resistor. If the circuit requires a power-type resistor, its rated power can be higher than 1 to 2 times the actual application circuitry.

(1) Test method: actual resistance can be measured with both end pins of the resistor, respectively. value. In order to improve the measurement accuracy, the range should be selected according to the size of the measured voltage resistance. Due to the nonlinear relationship of the ohmic shift, its intermediate is more refined, so the pointer indication value should be made as much as possible to the middle stage of the scale, that is, 20% to 80% curved range of the full scale, so that Measurement is more accurate. Depending on the level of resistance error, ± 5%, ± 10% or ± 20% of the readings and nominal resistances are permitted. If the error range is exceeded, the resistor varies the value.

(2) Note: When testing, especially when taking a resistance of tens of thousands of o'clock, the hand does not touch the conductive portion of the table and the resistor; the detected resistor is from the circuit. Welding, at least one head is to be welded, so as to avoid the impact of the test in the circuit, resulting in measurement error; although the resistance of the color loop resistance can be determined by the color ring sign, it is best to test it in use. A lower it actually resistant.