As mentioned earlier, it is difficult to obtain a consensus on the definition and classification of "electrophotography". As an example, the US IRE classification is listed in the table below.

People have already understood the "dry printing" as a representative method of combining optical effects and electrostatic phenomena.

Since this technology was invented by American C.F. Carlson in 1937 and 1938, it has mainly been researched and trial-produced in the United States for about two decades.

On the other hand, American Radio Corporation, with the assistance of the military, was developed by researchers such as CJ Young (Young) and HG Greig (Greig)

The technology in which zinc is a photosensitive material is called "Zinc Oxide Xerography" (Electrofax).

This "zinc oxide electrophotographic" technique is now collectively referred to as "electrostatic printing" together with the "selenium electrophotographic" technique. In addition, in the case of using photosensitive materials other than selenium and zinc oxide, as long as the process is the same, it should also belong to the scope of "electrostatic printing".

Below we will briefly introduce the electrophotographic technology of xerography, long-lasting conductivity imaging and photoelectric imaging. All these methods take advantage of the charge storage effect.

There is also a commercial imaging method that uses electrolyte imaging. The conductive latent image plate is used as an electrode, and the sub-electrolyte is deposited only in the conductive area. The density of electrolyte deposition in different conductivity areas is different, and the purpose of development can also be achieved. 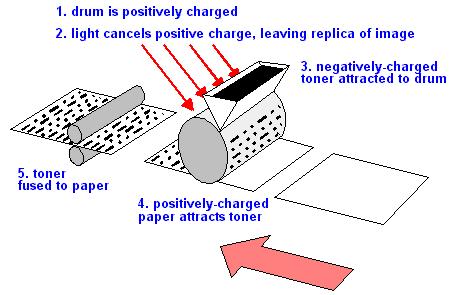 This imaging process is different from the above two processes, and its working principle is shown in Figure 1. A light conductor is placed on the surface of the dielectric, but with a small air gap. Under the illumination of the object image light, the photoconductor forms different conductive areas corresponding to the light and dark of the image; the area with strong light has high conductivity, and the area with weak light has low conductivity, so it also forms a conductive latent image. If a voltage is applied between the photoconductor and the dielectric, the air gap discharge under the high conductivity area on the photoconductor will be stronger, and more charges will be deposited on the surface of the dielectric, and the density of the charges deposited on the entire surface will vary with the image. . Through visualization, visible graphics can be obtained.

The principle of imaging

Transfer the developed image to paper or other materials;

After cleaning the photosensitive plate, it can be reused to copy other content. These five steps are illustrated in Figure 2.

As mentioned earlier, an improved form of electrophotographic-direct electrophotographic (Electrofax) uses a paper-based photosensitive plate to form and develop a latent image. And the fixed image are on the same board (paper), and the transfer step is omitted.

Important new photoconductors are selenium alloys (selenium-tellurium and arsenic triselenide) and organic polymers mainly based on polyvinylcarbazole, of which cadmium sulfide -The resin coating is used in the corona control method of Canon and KatsuraSawa. The combination of inorganic photoconductive material and polymer film has been used in the multilayer photosensitive element developed by Matsush.

The photoconductive surface on the toner cartridge is sensitized due to corona discharge. The ions generated by the discharge of a thin metal wire raised to a potential of several thousand volts greater than the ground line form a uniform electrostatic charge on the surface of the drum. The copy layer of the toner cartridge is inert until it is charged. So it can be reused to get multiple copies.

Place the charged photoconductor drum in the reflected light of the file to be copied and expose it. Simple optical devices can be used to enlarge, reduce or copy the same size. The unprinted areas of the original reflect light to the drum, causing the electrostatic charge in these areas to quickly disappear. The darker printing area reflects much less light, leaving a charge equivalent to the original printing information area on the drum surface. This is the charge map on the drum surface, called the latent image, which forms the basis of the drum electrostatic photocopying. .

Development of the image

When the exposed drum copy plate is flooded with tribo-charged colored toner particles with the opposite sign, a visible image is formed. The discharge area of ​​the drum is not affected by toner particles, while the latent image attracts and captures toner particles of opposite charge.

The toner contains colored pigments (usually carbon black) dispersed in a thermoplastic resin binder. Most toner cartridge copiers use dry powder. In the dry powder, when the toner is agitated, when the toner is in close contact with large particles of different charged developer materials, the particles are charged by friction. The toner particles are charged by the redistribution of the charge between the developer and the toner. Some copiers use magnetic color toner particles 20, and use a magnetic field to transfer the toner to the drum, and remove the toner from the non-image area. Sometimes dry lubricants are added to dry toners to help transfer and cleaning operations. A few copiers use liquid toner 24, which is a suspension of toner particles dispersed in an insulating liquid. The chemically formulated charge guiding material charges the toner particles through chemically adsorbed ions. When the particles of almost all substances are dispersed in the insulating liquid, they acquire electric charge as a result of the contact potential generated at the interface between the particles and the continuous phase liquid. However, for standard liquid toners, during the pulverization process, a charge director or charge control agent needs to be added to the toner to ensure uniform and controlled particle charge polarity. Resins or oils have been used as charge control agents; they are adsorbed on the surface of toner particles and are charged by the formation of an ionic double layer in the liquid dispersant. The toner particles in the liquid hydrocarbon dispersant are attracted to the latent image due to the electrophoretic force.

The developed image is transferred to the receiving substrate by placing a piece of paper on the developed image and performing electro-optics on the back of the developed image. Completed by halo discharge. If the transfer charge is stronger than the latent image charge on the drum copy plate, the toned image is transferred to the paper and the image remains when the paper leaves the drum. The principle of image transfer is the same regardless of whether powder, liquid or magnetic powder toner is used. However, each toner has different requirements for the properties of the receiving paper.

Fixing of the image

The paper containing the transferred image undergoes a process called "fixing", which melts the toner particles and fixes them permanently on the paper. On. The fixing operation is accomplished by using heat in the form of radiant energy, a hot roller, pressure, or a combination of heat and pressure.

The last step of toner cartridge copying is to restore the photoconductive surface for reuse. This process includes exposure of the cover layer to remove all charges and a purification process To remove unused toner particles. The general powder system uses a brush to remove toner; the magnetic toning system uses a strong magnetic field; the liquid toning system uses fresh toner to rinse and then uses a scraper to clean the drum surface.