CD burning speed refers to the maximum CD-R burning speed supported by the optical storage product. The mainstream built-in CD-RW products in the market can achieve a maximum recording speed of 52 times. There are also some 40 times and 48 times speed products. In actual work, they are affected by host performance and other factors. The difference in the burning speed of the three No disparity. The 52x speed is basically close to the limit of the CD-RW burner, and it is difficult to improve it. The speed of products on the external CD-RW burner market is quite different. There are 8 times, 24 times, 40 times, 48 ​​times and 52 times speeds, etc. The general size is small, and the burning speed of products that emphasize portability is generally higher. Low level. The relatively bulky external CD-RW burners basically maintain a higher burning speed, even the same as the built-in CD-RW burners. 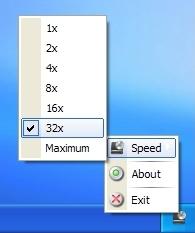 The highest burning speed that DVD burners in the market can achieve is 24 times. For the burning speed of 2 to 4 times, the data transfer per second is 2.76M ~5.52MB, it takes about 15-27 minutes to burn a 4.7GB DVD disc; while burning at 8x speed only takes 7 to 8 minutes, which is only a bit slower than burning a CD-R, but consider As far as the amount of data burned, the 8x speed recording speed has reached a very high level. DVD burning speed is the primary factor in buying a DVD burner. If you have sufficient funds, choose a high-speed DVD burner as much as possible.

Maximum CD reading speed refers to the maximum optical drive speed that optical storage products can achieve when reading CD-ROM discs. Because it is for CD-ROM discs, the speed is rated at the double speed of CD-ROM, not the double speed of DVD-ROM. The maximum CD reading speed that can be achieved by CD-ROM is 56 times; the speed of DVD-ROM reading CD-ROM is slightly lower. There are relatively few products that reach 52 times, and most of them are 48 times; COMBO products are basically all Reached 52 times the speed.

For a CD-ROM drive with 50 times speed, the theoretical data transfer rate should be: 150×50=7500K bytes/sec. In fact, the difference in the speed at which the CD-ROM drive reads the disk is not very important. This is because it is no longer a hindrance in the computer system. Moreover, the nominal value of the high-speed optical drive is only the maximum speed of the outer ring under ideal conditions. In actual applications, it is generally like 24 speed. Therefore, whether it is a 36-speed, 40-speed or 50-speed optical drive, the actual use of the subjective feeling is not very different.

CD rewriting speed refers to the speed at which a CD-RW disc is burned and data is stored on the disc when the recorder erases the data and burns new data. Maximum burning speed. Faster CD-RW burners can reach 32 times the speed when rewriting CD-RW discs. Although DVD burners also support the writability of CD-RW discs, the general CD rewriting speed is slightly lower than that of CD-RW burners. , Only individual products can achieve 32 times the speed of replication. COMBO products also perform well in CD-RW reproduction. The products on the market can basically reach the level of 24 times speed, and some products also reach 32 times speed.