The ruler is an integral part of the indicating device composed of a set of orderly ruler marks and related numbers.

On a given ruler, the length of the line segment between the beginning and end of the two ruler marks and passing through the midpoint of all the shortest marks.

The distance between any two adjacent ruler marks measured along the line segment of the ruler length.

Note: The distance between the scales is expressed in length units, and it has nothing to do with the unit to be measured or the unit marked on the scale.

The part of the scale between any two adjacent scale marks.

Note: The scale division has nothing to do with the measurement value, it only shows the interval that the scale can distinguish.

The difference between the scale values ​​corresponding to two adjacent scale marks.

In the entire ruler, the distance between each ruler and the corresponding division value are in a constant proportional relationship.

Note: The linear ruler with the same division value is called the regular ruler.

In the entire ruler, the distance between each ruler and the corresponding division value are in a non-constant proportional relationship.

Note: Some nonlinear scales have special names, such as logarithmic scales and square law scales.

A ruler that does not include the ruler value corresponding to the measured zero value in the ruler range.

Example: The ruler of a clinical thermometer. 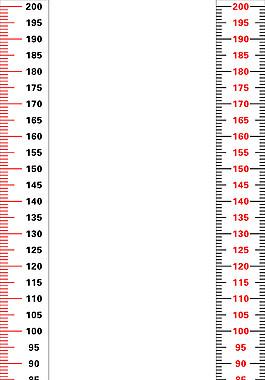 Metal rulers have the following characteristics:

1) Generally, metal rulers are easier to process than glass rulers, especially long rulers. However, it is much more difficult to obtain a very high surface finish than a glass ruler;

2) The linear expansion coefficient of the metal ruler is close to that of the entire instrument and the measured workpiece. In this respect, the instrument using a metal ruler is In use, the temperature conditions are relatively low. However, there are glass materials with a linear expansion coefficient close to that of metal ();

3) The cross section of the metal ruler can be made into a more complicated shape to reduce bending deformation.

The ruler will produce bending deformation under its own weight or external force, which will cause errors. The size of the error is closely related to the size and shape of the ruler section, as shown in Figure 1:

It is difficult to process a glass ruler into a complex shape , Generally rectangular section. According to the information, the glass ruler is processed into a trapezoidal section to reduce bending deformation, and simple shape glue is used to form an "H" shape, as shown in Figure 3. The effect is to be further studied.

To sum up, whether it is resistance to temperature changes or bending deformation, metal rulers are better than glass rulers, so the most precise rulers are made of metal.

The characteristics of glass ruler are:

1) It can be illuminated by transmitted light, and its brightness and contrast are better than that of a metal ruler with reflected light. Well, this advantage is more prominent when using photoelectric automatic reading;

2) A good surface finish can be obtained, so the surface quality of the glass ruler is very good;

4) It is good for photocopying.

In the past, K9 was often used as the material of glass rulers, which is characterized by good workability, harder and harder to scratch, but the disadvantage is that the coefficient of linear expansion a is quite different from that of steel. Therefore, in order to obtain accurate measurement results, the instrument can only be used at a constant temperature of 20±1°C (even more severe). In order to overcome this shortcoming, the Ministry has issued standards stipulating that the glass material adopts F6, which has a linear expansion coefficient similar to that of steel, but F6 glass is softer and has poor manufacturability. The protective glass of the ruler is still specified as K9.

The shape and size of the glass ruler blanks and protective glass are also stipulated in the standards issued by the Ministry. See Figure 4 and the table below.

The error and accuracy of the ruler

There are three main factors that affect the accuracy of the ruler: 1) scribing error; 2) error caused by temperature changes; 3) the ruler is deformed by gravity. error. The first item mainly depends on the scribing machine and the scribing process. Generally, the marking error of the scale can be divided into short-period error and long-period error, which are caused by the marking machine. The Ministry has issued a standard that clearly stipulates the accuracy of the scale. According to the maximum inaccuracy between any two reticles of the current scale, it is divided into five levels, namely:

where L is the distance between any two reticles (in millimeters).

The First Ministry of Machinery Industry has promulgated the standard for optical instruments (JB2215-78). The designer of the instrument should choose the scale with the appropriate accuracy level as much as possible according to the needs. However, the actual situation is that high-precision rulers cannot meet the needs. They are often replaced by lower-precision rulers. The method of using an error correction table is to verify the rulers with a higher-precision length ratio meter, and the The errors are listed in a table, and then corrected according to this table when using. Example: There is a 200 mm ruler, and the error values ​​of 0-1, 0-2,...0-200 are measured on the length ratio meter respectively, and a total of 200 engraved lines are listed. A table is attached to the user for use. It can be corrected according to this table. If the two readings of the length of a workpiece are 78.2194 and 11.6382 mm respectively, use the correction table to compare the data to calculate as follows:

So, the actual measured length is millimeters.

It can be seen from the above example that after using the correction table, the error of the ruler no longer depends on the marking error, but is determined by the verification error of the ruler, thereby improving the accuracy of the ruler. The photoelectric length ratio meter used to calibrate the ruler can generally achieve a calibration accuracy of ±0.5 microns. However, related measurement units in my country have developed laser interferometers, which can measure a range of 1 meter with an accuracy of ±0.2 microns.

Mechanical structure and adjustment of the ruler base

The mechanical structure of the ruler base should ensure that the ruler is fixed and reliable without internal stress, and the scribed surface is perpendicular to the optical axis, and the marking line and the ruler The direction of movement is vertical. Therefore, when designing the mechanical structure of the ruler, the possibility of adjusting the ruler should be fully considered to meet the above-mentioned basic requirements. The two specific structures are described below.

The picture shows the mechanical structure of the longitudinal ruler base of the 19JA universal tool microscope. The ruler 3 is supported in the ruler seat 11, and the scoring surface of the ruler faces down to prevent dust and other dirt from falling on the scoring surface, and the protective glass is glued on the scoring surface. The correct position of the ruler in the plane is adjusted by three screws 2, 12, etc. In order to prevent the ruler from deforming or crushing, the corresponding point on the opposite side of the adjusting screw is supported by an elastic fulcrum. The screw 2 is adjusted left and right, and the two screws 12 are adjusted back and forth. The correct position of the ruler on the vertical plane is by screwing the four adjusting nuts 1. Move the entire ruler base up and down to adjust.

The figure below is the mechanical structure diagram of the ruler on the main shaft of the universal length gauge. The ruler 8 and the protective glass 11 are integrated and installed in the measuring spindle. The scribed surface of the ruler should pass through the axis of the measuring spindle and should be perpendicular to the optical axis. Its correct position is achieved by adjusting the adjustment screws 7, 9, and 10. The corresponding points on the opposite side of the screw are supported by spring screws 5, 6, 12 to prevent the scale from being deformed or crushed. It can be seen that these two structures are designed in accordance with the principle of kinematics, with three constraint points on the bottom surface, two on the side surface and one on the end surface.