In 1950, with the outbreak of the North Korean War, the US Air Forced is forced to seek a light bomber that can quickly put into use, only the British "Canberra" bomber can meet the needs .

The US Air Force chooses the "Canberra" of the British Electric Company as a tactical attack bomber, which is the first line of foreign fighters since the first large-scale foreign fighter in 1918. Martin has laid a contract that is authorized to make this British jet plane. At the end of July 1953, this saved American B-57A entered the actual work. Soon after entering the actual work, most of the 75 A-type machines have been reclaimed into a photographic reconnaissance platform. Martin has made significant modifications to subsequent B-57B to make it more suitable as an attack machine. After the improved plane has a cockpit of the fighter type, adding a wing, and a rotary bomb door and improved avionics. 202 B-57B was produced in a total of 38 B-57C coaches, 20 B-57D high-altitude reconnaissance platform machines and 68 B-57E trails. In the War of Vietnam, the B-57 has been widely used. The last variant model is precise bomber B-57G, and they retired in 1974, but special electronic warplanes, meteorological reconnaissance machines and trail retrograms have been The National Air Guard served in 1982. The main types of

The US military named "Canberra" manufactured in the United States is a B-57A type, and July B-57A is specifically flying in July 1953.

B-57B is a fixed model of the nightly assault bomber, and the attacking capabilities of the new front fuselage and weapons and equipment are also greatly improved. The front body of the B-57B is a modern booster cabin, the pilot and the navigator deployed before and after the cabin, and they sit down below the long shell seat cover center. In addition, the wing of the B-57B bomber increases the weapon-diverting point, which uses new weapon cabins, which greatly improves attacking skills. In addition, the early models configured the shell weapon door. The time required for the hatch switch is too long. If it is in an open state, it will have a great resistance to the flight flight. The B-57B type uses a rotary weapon door, and the hollow axis is the front and rear longitudinal axis, and the hatch switch is controlled by the hydraulic control system, which can be opened within 6 seconds. The weapon cabin can carry a size of 454 kilograms and a bomb of 454 kg and a 100 kg of the size. Placing the bomb has a maximum of 21. In June 1954, the first B-57B aircraft was first test flight. During January 1955 to June 1959, Martin produced 202 airplanes for the first-line combat troops. In addition, the B-57B bomber also has the facade of the Pacific Air Force and Air Force National Guard.

B-57C bomber and B-57B bomber The only difference is to install a dual control system, and therefore, the model can be used to carry out modified and skilled training. In 1955, the B-57C equipment forces produced 38 production.

Since then, the United States has launched the B-57E type aircraft, and the only difference between the B-57E model is the installation of dual control systems or towns (4) compared to the B-57D type. Flag-shaped target). After the B-57E type is configured, it can be used to perform modification or skilled training, and the most commonly used training fighter pilots have implemented aerial shots, which is the standard task of fighters to implement nights.

until the final development phase, the B-57 series bombers get the ability to implement attacks in the pure night environment. However, as early as the initial development stage, designers considered the development of this ability. Only 16 B-57B bomber have this ability, and renamed the B-57G type "night intruder" bomber after modification. 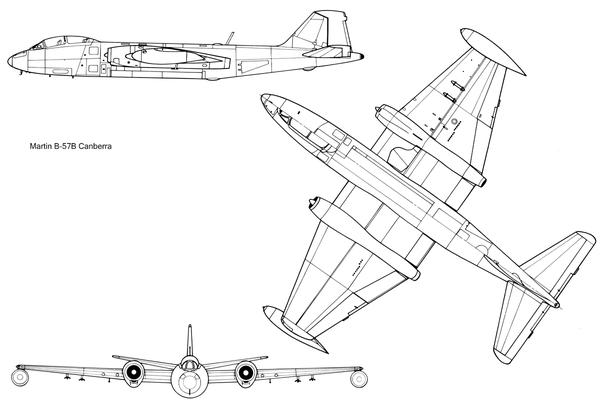 The bucks in the middle of the fuselage and the wing hanging rack can be hanging various pairs of arms. Bombing fixed weapons are 8 very 12.7 mm machine guns, and each preparation is 300, or modified four-door 20 mm robot.

is equipped with two J65-W-5 turbo jet engines for night attacks or tactical bombs. The driver and the pilot are arranged before and after, and the cabin is equipped with a throttable seat cover and ejecting seat. It is equipped with an anti-ice making device and a windshield. The rear body increases the hydraulic manipulation deceleration plate, and the magic wing "refers to" decapitulum board co-action. The first B-57B fly the first time on June 28, 1954.

is basically the same as B-57B, but the duplex operating system is installed as a trainer to make the flight driver skilled driving technology. The first B-57C fled first on December 30, 1954.

is basically the same as B-57B, but can be used as tactical bomber and trails, which can be towed in various different forms of drag. Take 4 towers in the external drag tank each time, when making a bomber, simply remove the trailer control cabin and the drag tank, and the bomb cabin equipment is loaded inside the body.