Overview of China as early as the third century, there is the original hydraulic turbine, the use of water for water or hulling. 1830, France made a turbine. The wind machine was first seen in the writings of the Arabs in the 9th century, the 11th century has been widely used in the Middle East, spread to Europe in the 13th century. Chinese Song Dynasty in the 12th century began to use wind turbines. In the 1850s, beginning with the North American steam-driven fixed agricultural working machine, such as feed mill, cotton gin, etc., later evolved into a self-propelled steam engine, it can flow between the farm use, mainly for driving stationary grain thresher for towing field machinery is not successful, only in a very short time in the early 20th century, it was used 10 to 18 large-scale tractor plow spade in parts of North America, the United Kingdom and Central Europe in the steam engine as a rope plows power. Early 20th century, there was a tractor equipped with an internal combustion engine, and a lot to promote the use of starting from the 1920s, a major agricultural power machinery.

20 century, 20 to 40 years, China has been the introduction of small batch production and small internal combustion engines for agricultural irrigation and rice milling, grinding, cotton and other agricultural products processing industry use. Since the 1950s gradual establishment of internal combustion engines, tractors and motor industry, agricultural machinery power developed rapidly. Also once the development of pan camel machine by a small steam engine and gas engine and boiler component, because the body is bulky, low thermal efficiency, convenient maintenance and other reasons, after 60 years no longer in production.

Farm engine main diesel, gasoline, gas and other. Full line of reciprocating internal combustion engine using a liquid or gaseous fuel, by the body, a cylinder head, a cylinder liner, a piston, a crankshaft connecting rod, valve means, the fuel supply system, cooling system, flywheel, starter and so on. The fuel combustion in the cylinder, heat energy is released, pushes the piston reciprocates, so that thermal energy into mechanical work. Working cycle internal combustion engine includes an intake, compression, combustion, expansion and exhaust processes and the like. Converting the piston stroke between two stroke movement direction of a number of press strokes per working cycle in four stroke and two-stroke two; partial manner ignited by ignition and compression-ignition type two. The most commonly used for agricultural four-stroke internal combustion engine is a diesel engine, followed by a four-stroke gasoline engine. The following two-stroke multi 2.2 kilowatts gasoline, lighter due to the weight of the unit power, easy to carry or bear. Some small farm machinery use of two-stroke gasoline-powered. 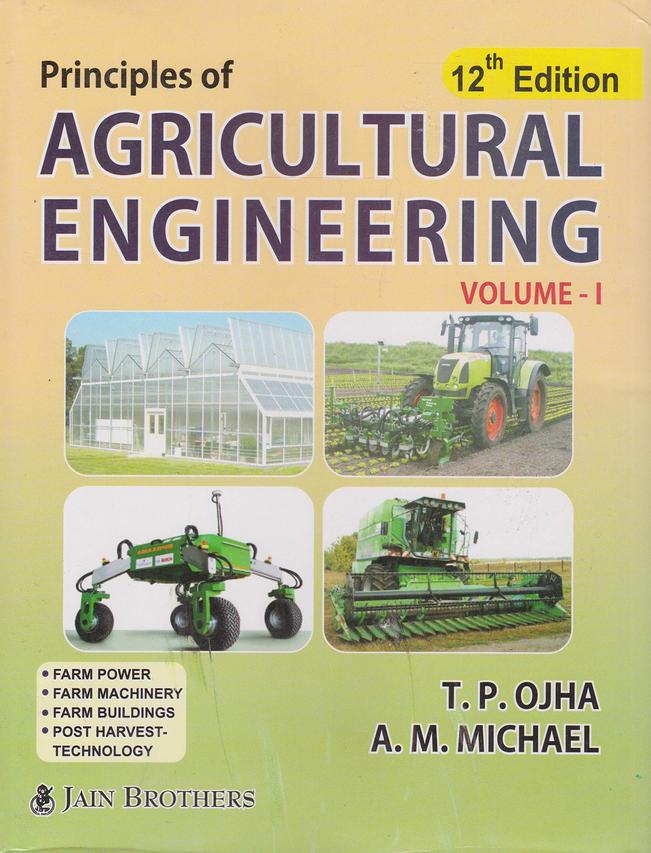 Farm diesel four-stroke diesel engine of Diesel (FIG. 1). Which crank revolution per two complete a cycle, four stroke reciprocating piston within the cylinder. During the intake stroke, the piston top dead center from the bottom dead movement, the intake valve opening, exhaust valve closing, the cylinder intake fresh air. In the compression stroke, piston stop upward from the bottom dead center point is moved, the intake and exhaust valve are closed, at the end of the compression stroke, diesel fuel injector into the cylinder. After diesel combustion within the cylinder, the expansion stroke to achieve a sharp increase in the gas pressure pushes the piston downwardly from the top dead point stop point movement. At the end of the expansion stroke, the exhaust valve opens, continued rotation of the crankshaft driven by the piston stop upward movement of the bottom dead center point, to achieve an exhaust stroke, the exhaust gas exits the cylinders. Genus compression ignition diesel engine, using hot air after compression ignition diesel fuel, has high thermal efficiency, economy is good, reliable, safe, etc.. In agricultural production it is widely used as a power field and fixed operations and transportation in agriculture.

gasoline four-stroke gasoline engine with four strokes of the same four stroke diesel engine, in the intake stroke into the cylinder gasoline atomized with air mixed gas. At the end of the compression stroke, the spark plug of sparking, ignite the mixture. Cylinder two-stroke gasoline engine (FIG. 2) is provided with an intake port, an exhaust port and a ventilation port, a revolution per revolution of the crankshaft to complete a cycle of work, a total of two reciprocation of the piston stroke. In a first stroke, the piston stopper from the bottom dead center point is moved upward, the first intake port is closed, then closing the ventilation port and an exhaust port, and then the compressed mixture. Opening the intake port when the piston is near top dead center, the mixture gas into the crankcase, then the spark plug to spark, igniting the air-fuel mixture to generate high pressure pushes the piston bottom dead movement, start the second stroke. In this case the intake port is closed, the crankcase gas mixture is compressed and subsequently opens the exhaust port, the exhaust gas exclusion, and the ventilation port open, so that air-fuel mixture in the crankcase into the cylinder is compressed, to begin the next cycle. Genus ignition gasoline engine, a battery or by a DC generator by the ignition coil to generate spark ignition spark plug, compact structure, smooth, easier to manufacture, easy to start, in the production in the agricultural field operations as small power.

is a gas engine using natural gas, associated gas, liquefied petroleum gas and other gases and furnace fueled internal combustion engine. Agricultural machine using gas furnace gas, which is made of a solid fuel in a gas furnace, after filtration, cooled and mixed with air into the cylinder. Gas machine is ignited internal combustion engine, which is similar to a gasoline engine during operation. Gasoline and diesel engines can be fueled with a modified gas.

motor converts electrical energy into mechanical energy to mechanical power. Depending on the motor and a DC power source is divided into two categories AC motor, the AC motor is divided into synchronous and asynchronous types. Rotor speed synchronous motor with the stator winding through a rotating magnetic field is generated at the same speed when the electric current; induction motor, also known as asynchronous motor, three-phase and single-phase two, the rotor speed is less than the rotational speed of the rotating magnetic field. The structure of its rotor, and the winding cage is divided into two. Three-phase cage induction motor because of its simple structure, reliable, easy to repair, is widely used in agriculture. Cage motor by way of a protective shield, closed and sealed three kinds. A shield can or other debris from the water droplets to fall within the above electric motor, preferably ventilated, but not against moisture and dust, are generally used to clean, dry place. Enclosed to prevent dust, iron or other debris intrusion of moisture can also be used for open air, moisture, dust occasions, such as supporting the agricultural product processing machine and pump. Sealed can be immersed in the water work, such as a submersible motor.

China agricultural production of Y-series three-phase asynchronous motor (generally a squirrel cage rotor) and YQ series (high starting torque double squirrel-cage rotor). The selection of the motor, the primary consideration is the size suitable power, but also consider the rotational speed, allowing the starter overload performance and other factors. Chinese predetermined nominal motor temperature rise is meant that the insulating material and the difference between the maximum allowable temperature of 40 ℃. Main reason for failure of the motor are: the power supply voltage is too low or too high, the winding earthing (Shell), a short-circuit winding, single-phase operation; broken rotor bars and the like. Therefore, the operation of the motor pay attention to monitoring, to identify problems and take appropriate measures to troubleshooting, in order to ensure safety in production.

wind turbine wind energy into mechanical energy to power machinery. A modern wind turbine a wind turbine, tower, transmission, the governor, brakes and steering pivot device and other components (FIG. 3). Wind powered by a wind wheel rotates, to drive various work machine via a transmission or drive generators. According to structural type, Wind Turbine vertical axis and the horizontal axis types. Currently used in agriculture as a horizontal axis, which has a wind wheel type awning type, multi-blade propeller airplane impeller (18 to 24 vanes) and the like. A wind turbine support tower, the wood truss structure, the metal truss, truss reinforced concrete type. Tower height approximately 1/7 the power of the wind speed is proportional to the high manufacturing cost is too high, too low, the lack of wind. A transmission (gear box or gear liter) to several tens of revolutions per minute rotor speed is increased to the rated speed of the generator or working machine. When the reciprocating pump driven by a wind turbine, the crank mechanism is often directly mounted on the rotor shaft; low-powered generator, the generator rotor shaft directly coupled with the shaft. Both cases can no transmission. Effect of the governor is to prevent damage to the blades at wind speeds surge, and keep the generator constant frequency regulator. There are two frontal area changes with the rotational resistance of the rotor blade speed adjustment manner. The former centrifugal governor, a plurality of small wind turbine; As the wind, the wind turbine exceeds a certain speed, the brake wings are thrown out by the centrifugal force, wind force wheel deceleration. On large wind turbine, the rotor speed regulation spring to wind round lateralization in reducing the frontal area of ​​the wind turbine that deceleration. In the wind turbine type awning, the awning sheets drop by changing the rotor canopy frontal area. Power (P) the rotor obtained by the following equation is calculated:

water turbine converts the kinetic and potential energy into mechanical energy to power machinery. If the called station together with the current generator output; if the water turbine to become integrated with the pump. Turbine according to their works have counter-type and impact-type categories. Counter flow type can simultaneously utilize the kinetic and potential energy, can be divided into Francis, mixed flow, axial flow and cross flow type and the like; impact type using the kinetic energy of the water flow can be divided into chipping, ramp and the formula Double-click type. Above all types, to Francis, axial and chipping applications more. Francis turbine (FIG. 4) by the water flow to enter the volute diameter, driven by rotation of the rotor, by turning flows axially to the draft tube. Axial flow turbine wheel from entering the axial direction, the outflow from the other axial end. The impact of energy supply, science and technology, process materials, conditions in rural areas, environmental protection and economic development trends and the proportions of various types of agricultural machinery by power. With the development of agriculture electrification work in a fixed priority to the development of the motor; areas rich in wind resources, wind speed pastoral, coastal and remote areas in more than 3-4 m / s, should be a planned development of wind turbine; the hydraulic the large gap between resource-rich regions, can develop medium and small hydropower stations. The engine will continue to be developed, but the proportion of agricultural machinery power will be constrained diesel and gasoline production. To save energy, improve the power, there will be more in diesel engine supercharging device. Using a variety of renewable energy sources (such as biogas, gas, alcohol, etc.) and solid fuel engines, will be re-used and the different levels of development. Both with petroleum fuels, but gaseous fuel and petroleum-based fuels pilot dual fuel engine, such as gas - diesel, methane - diesel and natural gas - diesel engine to use research and attention.