The tiny photosensitive material implanted on the CCD is called a pixel. The more pixels contained in a CCD, the higher the picture resolution it provides. CCD acts like film, but it converts image pixels into digital signals. There are many neatly arranged capacitors on the CCD, which can sense light and convert the image into a digital signal. Through the control of an external circuit, each small capacitor can transfer its charge to its neighboring capacitors. 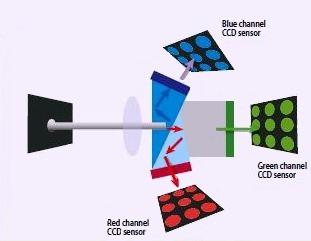 CCD was invented by Willard S. Boyle and George E. Smith of Bell Labs in the United States. Smith) invented. At that time, Bell Labs was developing video phones and semiconductor bubble memory. After combining these two new technologies, Boyle and Smith came up with a device they named "Charge "Bubble" Devices. The characteristic of this device is that it can transfer electric charge along the surface of a piece of semiconductor, and it was tried to be used as a memory device. At that time, it could only input the memory by "injecting" electric charge from the register. But then it was discovered that the photoelectric effect can generate charges on the surface of such devices to form digital images.

By the 1970s, Bell Labs researchers were able to capture images with simple linear devices, and CCD was born. Several companies continued this invention and began further research, including Fairchild Semiconductor, RCA and Texas Instruments. Among them, the products of Fast Semiconductor were the first to go on the market. In 1974, they released a 500-unit linear device and a 100x100-pixel planar device.

CCD is widely used in digital photography, astronomy, especially optical telemetry technology, optical and spectrum telescope, and high-speed photography technology such as Lucky imaging. CCD is widely used in video cameras, digital cameras and scanners, but the camera uses dot-matrix CCD, which includes x and y directions for capturing flat images, while the scanner uses linear CCD, which only Scanning in the x-direction and y-direction is done by the mechanical device of the scanner.

3CCD, as the name implies, is a camera using three CCDs. We know that if light passes through a special prism, it will be divided into three colors: red, green, and blue. These three colors are the three primary colors used in our TV. Through these three primary colors, we can generate signals including brightness. All TV signals included. If you use a piece of CCD to receive each color and convert it into an electrical signal, and then produce an image signal after circuit processing, in this way, a 3CCD system is formed.

Compared with single CCD, because 3CCD uses three CCDs to convert red, green, and blue signals, the captured image is more natural than single CCD in terms of color reproduction, and the brightness and definition are also better. Single CCD is good. However, due to the use of three CCDs, the price of a 3CCD camera is much more expensive than a single CCD, so only professional cameras will use 3CCD.